Under Daddy’s Roof by Jaye Elise 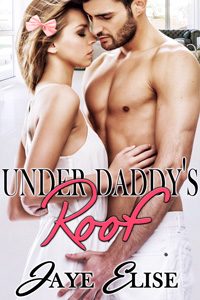 When one late-night party too many finally gets her evicted from her apartment and her wild reputation makes finding another place in her small college town all but impossible, Cassie Brown quickly realizes she is in deep trouble.

James Forsythe is still healing from the tragic loss of the woman he loved, but meeting Cassie awakened a part of him he’d thought was gone forever, and over the months since then his desire to take the beautiful, feisty girl in hand has only grown stronger. Upon hearing about Cassie’s situation, James offers her a room in his home, but he makes it very clear that while she is living under his roof she will follow his rules or face the consequences.

Though the idea of having her pants and panties taken down for a bare-bottom spanking when she has been naughty leaves Cassie blushing, she cannot help wondering what it would be like to have a firm but loving daddy who cares enough to provide the correction she so desperately needs, and she decides to take James up on his offer.

Once she has moved in, Cassie wastes little time in putting her handsome host to the test, and she quickly earns herself a painful, embarrassing spanking. The stern punishment arouses her deeply, and when James takes her in his arms and makes her his own it is better than anything she has ever experienced. But it will take more than just a sore bottom to keep Cassie in line. Can James tame his headstrong little girl before her self-destructive behavior tears their relationship apart?

Cassie waited, bent over at the waist with her jeans around her ankles. There is no way I’m eating that broccoli, so he can just forget about it. A spanking is a small price to pay for avoiding that vile crap, she fumed to herself as she tried to stop thinking about her precarious position and her impending punishment. But her body betrayed her and she couldn’t stem the arousal seeping into her panties. Arousal he could almost surely see. Bent over the chair and with her head tilted downward, she could even smell her unique fragrance as her body primed itself for pleasure and pain. Her mind spun uncontrollably, embarrassed at her body’s response to his command, yet at the same time needing to be taken in hand. But although she’d fantasized about being bared to him and taken to task, and he’d even told her that he’d be spanking her without her pants on, the stark reality of her situation was more challenging than she’d anticipated.

You could’ve choked down a bite of broccoli for him though. And you could’ve apologized for the attitude. After all, he just made you dinner and gave you a place to stay when no one else did. Why didn’t you just back down?

She couldn’t immediately think of a response to this last question, but the moment she felt her sex clench in anticipation, she inherently knew why she had refused. She wanted his discipline. She wanted to feel what he was capable of. Looking over her shoulder, she saw him observing her, studying her reactions to the situation. If he was hoping to make her feel vulnerable, he’d accomplished his mission.

Laying his left hand across the small of her back, he explained what was to come. “You’ve chosen to be naughty tonight by not eating your broccoli and by being sassy with me, and you’re going to take your spanking over your panties. Next time, the panties come off. Do we understand each other?” She whispered a quick, contrite yes, James as he took up position by her hip. “Very well, let’s get started, shall we?”

Even though she knew she was about to get spanked, the first smack to her right cheek seemed to come out of nowhere, searing into her backside, and she made an effort to shift away from him. “Stay still and take your punishment, Cassie.” She felt his hand clamp down on her hip, repositioning her to his liking before loosening his grip. He wasn’t screwing around and she knew it. The next few swats came in rapid succession across both cheeks and, knowing what to expect this time, she was able to absorb them. Yet as he continued to layer volleys of smacks along the curve of her bottom, the sting began to settle in and she wriggled clumsily, held captive by the denim around her ankles and by the man thoroughly punishing her bottom. But it wasn’t just the pain that had her squirming. It was the innate knowledge that he was tapping into something deep inside her and exposing it to the heat of his well-placed, firm palm.

“Stop wriggling and take your discipline for me. Or do I need to hold you in place, young lady?” Screwing her eyes shut, she braced herself and bit down on her lip, willing herself to endure his discipline. As he continued to bounce his hand across her cheeks and the tender spots along her upper thighs, she imagined her bottom turning the same deep pink shade as her arousal-soaked panties. She’d never been spanked in her entire life—her parents had been overly lax in the discipline department—and Cassie had no idea it could burn so much.

Or turn her on so much.