Don't Miss
Home / Blog / Under His Control by Stella Blanche

Under His Control by Stella Blanche 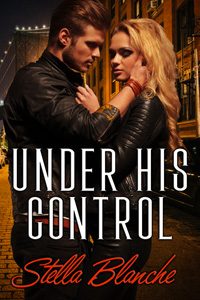 After a rough childhood in the foster system and several years spent studying abroad, Sage has returned home with the intention of doing whatever she pleases. The only thing standing in the way of her plans is an arrogant, controlling, infuriatingly sexy millionaire named Caleb.

Over the years since she was rescued from the orphanage by his kindhearted, terminally ill sister, Caleb has frequently made it his business to tell Sage exactly how to run her life. When her self-destructive behavior gets out of control, he finally decides to take matters into his own hands, even if that means spanking her bare ass until she’s learned a lesson she won’t forget.

No matter how much she tries to hate him, Caleb’s stern dominance awakens Sage’s passions in a way nothing ever has before. His masterful lovemaking leaves her utterly spent and satisfied, and though the wounds of her past make it difficult to keep from pushing him away, she cannot help wondering if Caleb might be the one to tame her. But when a psychotic stalker who once tormented her returns to threaten Sage again, can she count on the man she loves to protect her?

Publisher’s Note: Under His Control contains spankings, sexual scenes, and some potentially disturbing descriptions of violence and abuse suffered by some of the characters during their childhoods. If such material would be likely to offend or upset you, please don’t buy this book.

“If I ever find out that you are using again, this will be the least I will do to you, do you understand?” Sage gulped; what the hell was he planning to do? “Do you understand?” His voice was raised, borderline yelling but not quite there. She nodded nervously and had no time to prepare herself as the end of her belt came into contact with her pussy harshly, bringing with it a searing pain that had her crying out at the burn and her back arching as far as possible.

“Count, Sage.” His voice was stern and for the first time in eight years, she was scared shitless.

Tears pooled in her eyes and she closed them, not wanting him to see them. Her body reflexively tried to get away from his hand that was fast swooping down again.

Another cracking sound resounded through the room and she had to bite her lip to contain her scream. He halted his movements and waited for her to regain whatever composure she could.

“Four.” Her voice was strained and weak, but with her eyes closed tightly she didn’t see the fleeting flash of regret in his eyes before he straightened his shoulders and brought the belt down again, the hardest blow yet and she couldn’t help the small scream from bursting past her lips.

“Five.” He counted for her as she tried to control her breathing, then she heard him leave the room. She couldn’t keep the one lone tear from escaping from beneath her tightly closed eyelids and she had no way of wiping it away either. Her body jerked and she gasped, eyes flying open as she felt something cold and wet pushing against her tender, sore, and most likely bruised pussy.

Caleb sighed as he swiftly untied her legs and arms, rubbing the stretched and aching limbs, before lying down on top of her, careful not to crush her completely. He gently wiped away the tear and this only caused another to fall.

“Baby, you have to understand that I am trying to help you.”

He was going to help her by belting her sore pussy? If she wasn’t trying so hard to contain the sobs bubbling in her chest, she would have snorted at his ridiculous statement. She did not really see how this was helping her so she merely shook her head as a response, closing her eyes again. Her heart felt nearly as bruised as the tender and swollen lips between her legs. He kissed her gently then, his hands trailing up and down her body in a soothing manner. She didn’t know what the fuck was going on with her body, but despite the hard belting she just took, arousal was soon rushing through her veins. Tears and sobs forgotten, she wrapped her arms around him. She didn’t know for how long they were making out, but she gasped and pulled away in a moan when he thrust into her suddenly, hard and fast. She pulled his head down to hers again and kissed him furiously. She met his hips thrust for thrust as she felt the tension in her building at a rapid pace. Suddenly and without warning the dam burst and she cried out at the intensity of her orgasm. Caleb grunted as he found his own release, his lips turning softer and gentler as they rode the gentle waves, coming down from the high of orgasm. She was nearly asleep again when he pulled her closer to him, pressing a tender kiss to her exposed shoulder.

“Please don’t run from me again.”

2017-10-01
Chris
Previous: Taking Charge by Lily Harlem
Next: Leashed by the Dragons by Loki Renard