Don't Miss
Home / Blog / Under His Protection by Isabella Laase

Under His Protection by Isabella Laase 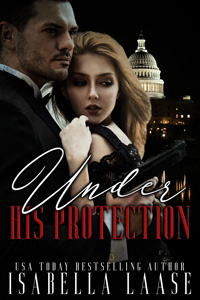 Though she does her best to live the life of a spoiled, carefree twenty-three-year-old, Victoria Bradford has a problem: she’s the president’s daughter. Matters finally come to a head when she takes her daddy’s little princess antics too far and ends up earning herself a painful, embarrassing spanking over the knee of the stern, handsome Secret Service agent assigned to watch over her.

Alejandro Cruz knew he’d have his work cut out for him with Victoria, and he does not hesitate to bare her bottom and punish her like a naughty little girl when her behavior makes it necessary. But despite her protests, the humiliating chastisement arouses Victoria deeply, and it isn’t long before she is begging her firm-handed protector to take her in his arms and claim her properly.

Over the coming days, Cruz sets about teaching Victoria just how pleasurable it can be to surrender her body to his mastery. But when the president and his family are put at risk by a mysterious enemy, will Cruz be ready to lay his life on the line to keep Victoria safe?

He returned to tease her pussy with long, fluid movement, but this time, he entered her vagina, pulling and prodding with his finger to reach a deep spot, then adding a second digit to deliver more breadth. Her breath continued in slow, steady pants, and she moaned softly, grinding her cunt against his hand with a magical rhythm, her primal needs trumping all mortification. “You like this, don’t you, kitten?” he asked softly, leaning away from her to reach toward his nightstand.

The vibrator’s purring engine startled her, but his restraints kept her from moving as he rested the sensation on her outer lips, the cool plastic toy drawing all of her focus to a single vacant spot, running over her channel, teasing her to a frenzy of need. She cried out, twisting her body in a failed attempt to force her emptiness into him, but he alternated between a gentle tickling and a hard, demanding attack over her clit, never entering her and pulling back when her orgasm drew close.

“You’re getting there,” he said absently. “But you’re still trying to control this, and that’s going to cost you because I punish naughty little asses who forget the meaning of submission.” Another long few seconds elapsed before he separated her ass cheeks and a second cold, lube-covered plastic pushed against her bottom hole, barely entering her most secret place. “Ask me for your punishment,” he grumbled, his tight restraints easily defeating any attempts to evade him, “and I’ll show you how this is supposed to be done.”

Her pussy remained open, the unfamiliar vulnerability increasing her trepidation, and she clenched her bottom cheeks tightly. “Please, sir.” Her voice was just above a whisper. “I’m sorry. But not in my bottom. Please. I don’t like that.”

“You aren’t supposed to like a punishment, little girl, but you’re going to have to beg me for this one. How full do you need this before you’ve learned all my rules?” Pulling sharply against her restraints, she wiggled her bottom back and forth as much as his hold would allow, but nothing expelled the mortifying intrusion that continued to inch its way into virginal space. When she didn’t answer, he slid the plastic further up her ass, pushing past a series of involuntary muscles that desperately tried to evict him until it rested against her cheeks.

He released her legs from their restraints, rubbing the cramping pain in her thighs until it disappeared, and added some length to the chain over her head to pull her to the edge of the table, the plug penetrating her ass even deeper, and her legs were refastened to the sides with her pussy at the perfect height for his erection.

When he finally unzipped his pants and freed his cock, her vagina spasmed slightly in anticipation, and the gift of spidery blue veins decorating his hard length remained tantalizingly out of her reach. He added a condom, and his sheathed cock pushed at her wet opening, curling her arousal through her body, his slacks rubbing against her mons. He entered her without warning, filling her emptiness and brushing the plastic in her ass from the inside. She cried out at the brute force, the blood rushing through her veins and pulsing in her ears.

Moving slowly, he established his rhythm and his control with long, swift movements before withdrawing completely to tease her clit with his cock. She was close, her breath coming in shallow pants and her hips rocking to meet his, but he seemed unwilling to deliver the last piece of her release until he’d satisfied his own needs. He fucked her slowly, his shaft, lubricated by her arousal, sliding through her wet cunt, building her to an indescribable pleasure.

So intent on the full effect of his cock, she barely recognized when he slid his hand between her legs. Rubbing and pinching her clit, he played with her, shooting the carnal pleasure throughout her system and pulling the orgasm from her with a burst of sheer gratification feeding the spasms. She cried out, a half moan and half guttural scream, but he continued to fuck her past the explosion, taking her beyond her max, slapping his balls against her cunt, her rolling orgasm continuing until he released with a thunderous roar that pounded through her ecstasy.

2019-11-24
Chris
Previous: Her Shameful Wedding Night by Emily Tilton
Next: Forced to Cooperate: A Dark Bratva Romance by Piper Stone