Under House Arrest by Sassa Daniels 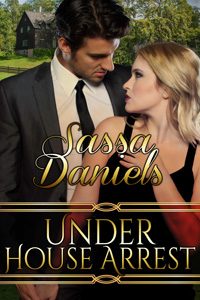 Deep in debt and desperate, Lindy Halliwell makes the foolish decision to steal an expensive piece of jewelry. When she is caught red-handed, however, Lindy is faced with a difficult choice. To avoid a criminal record, she will be required to spend the next few weeks under house arrest at the estate of Jackson Davies, the stern, handsome gentleman who discovered her crime, and during that time Jackson will be free to punish her in any way he sees fit.

Lindy reluctantly agrees to the arrangement, but upon her arrival she quickly discovers that her ordeal will be much more humiliating than she anticipated. Before she knows it, she has been stripped bare for a thorough, intimate medical examination, and over the coming days she frequently finds herself over Jackson’s knee for a painful, embarrassing bare-bottom spanking.

Though the shameful chastisements leave her blushing and sore, Lindy cannot deny her body’s response to Jackson’s firm-handed dominance, and soon she is yearning for him to take her long and hard. When he claims her properly the pleasure is more intense than she would have ever dreamed, and their passion for each other grows with each passing day. But when the man to whom Lindy owes her debts comes looking for her, can Jackson keep her safe?

Publisher’s Note: Under House Arrest is a stand-alone sequel to Donovan’s Rules. It includes spankings and sexual scenes. If such material offends you, please don’t buy this book.

Helpless to interfere in what would happen next, Lindy felt an unexpected shiver of arousal coursing through her. Jackson turned his attention back to her clitoris, flicking his finger gently over the swollen nub and making it throb wildly. As the first unmistakable waves of pleasure began to wash over her, he took the pulsating bud between his fingers and pinched hard, sending her screaming into orgasm.

“That was a beautiful climax, my dear. You’re very sensitive.” Dr. Gilbert grinned widely and Lindy basked in the praise as her mind slowly drifted back to earth. The other woman stood next to her and pressed her fingers against the side of Lindy’s neck, her head cocked in concentration as she checked her pulse. “And it certainly got your heart rate up.”

The doctor moved to the bottom of the bed and took a seat. Mortified as the other woman stared at her dripping wet pussy, Lindy snapped her legs shut. Immediately she was rewarded for her disobedience with a hard slap across the thigh. She barely had time to register the burning sensation in her flesh before the doctor took hold of her raised knees and parted her legs forcefully.

“Now, keep them wide apart or I will have Jackson hold them while I give that plump little clit of yours a thorough spanking.”

Panic flared in Lindy’s eyes and, knowing that she was not yet ready to face such a sensual ordeal, she did as she was told. Humiliating as this was, it might get a whole lot worse if she continued to allow her mind to overrule her body like this.

“Now, I just need to check that everything is alright internally.”

She pressed a hand firmly down on Lindy’s abdomen as she pushed first one, and then two long, slender fingers deep into her vagina. As Lindy flinched at the intimate invasion, Jackson moved unexpectedly to take her mouth with his. There was nothing tender about his kiss. It was an assertion of dominance that set every part of her ablaze. His tongue swept in and out of her mouth, matching the rhythm of the female fingers that probed inside her seeking, and finding, that magical spot on the wall of her soaking wet cunt. As the doctor pumped her fingers in and out of Lindy’s body, Jackson massaged her breasts, his thumb circling the pretty pink areola with a teasingly light touch.

It was all too much and yet not enough. Lindy writhed on the bed in a fit of helpless passion, whatever anxieties she might have felt about being touched so intimately by another woman shattering as she was hurled into the most intense orgasm she had ever experienced. Her hips bucked violently off the bed, her wrists straining in their bonds as she shrieked out her pleasure.

As she regained her awareness of the room around her, she saw the approving expressions on the faces of her two sensual tormentors and for a moment she basked in the glow of having passed a major test.

“Excellent responses,” Dr. Gilbert said. “And everything appears to be healthy. So now we just need to take your temperature.” She looked to Jackson now. “How do you want to do this?”

Already he was untying her from the bed. He unwound the tie from around her wrists and rubbed them gently to help her get the feeling back, confusing Lindy once more with his ability to be tender.

“On all fours.” It was an instruction as much as a response to the question.

“What?” Lindy sat forward, clasping her hands around her knees as she realized the sterile package the doctor was now opening contained an oversized rectal thermometer.

2017-04-15
Chris
Previous: Shared by the Doctors by Samantha Madisen
Next: Sharing the Princess by Katie Douglas