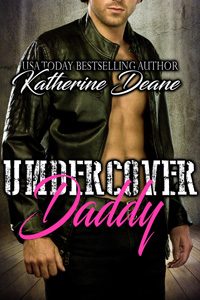 Twenty-five-year-old Alex Makowski wants nothing more than to live up to her father’s legacy on the police force, but when she bungles a major drug bust she ends up placed on administrative leave. Her chance to redeem herself comes in the form of an assignment working alongside Sergeant Connor Doyle, her father’s former partner and best friend.

Some of the contestants in a kink-themed charity pageant have been receiving ominous messages, and Connor and Alex have been tasked with going undercover at the event. He will be her daddy dom, and they will need to do whatever is necessary to play the part convincingly.

Connor jumps at the opportunity to take Alex in hand, and soon enough she is blushing crimson as her bare bottom is soundly spanked. But when the punishment is over she is left aching for his touch, and before she knows it she is writhing in ecstasy as her stern, sexy daddy brings her to a shattering climax over his knee.

Alex and Connor find themselves slipping naturally into their roles as their investigation gets underway, and when he takes her in his arms and shows her how a dominant man makes love to a woman, their passion is more intense than she ever thought possible. But when the mission puts both of their lives at risk, will their newfound romance survive?

“Naughty little thing, getting turned on by your spanking.” He smacked her hard twice on each side, and turned his chair so her lower half faced their audience. “Show them.” He slapped the inside of her legs, and her legs spread wide, giving everyone a glimpse of just how unstrung she was over his lap. He was about to ask her if it was too much, if he was crossing a line, when she hooked her left leg over his and began humping him.

The crowd murmured its approval as she rubbed her wet clit against his pants. Damnit, he was about to come unglued himself. Out of the corner of his eye, a woman dropped to her knees and started pulling her partner’s zipper down. Another pulled her skirt up for her daddy to stroke her while they watched. This was surreal. He should have been mortified that he was even thinking about following through with this hedonistic display with Alex. But he wasn’t. His cock was too busy reminding him of just how damned aroused he was. He would finish their show, then take his woman back to their room and fuck her senseless. Anything less would kill him.

Smacking her ass a few more times, he pressed her down harder onto his knee. “Keep doing that. Don’t stop, little girl.” Already getting out of breath and overheated with lust, she continued grinding as he smacked her ass, the sound echoing throughout the room. Obviously someone else wanted their own happy ending.

He gave her one more hard swat, and she erupted against his leg, shrieking as she flailed and flopped and gripped his knee for all she was worth. Her arousal drenched his pants, seeping through the dark material and onto his skin. She sagged against him with a loud groan.

“Oh, no.” He brought her back up so she was over his lap again, but this time straddled her with his own leg, holding her in place. “I’m not through with you. Do you know what happens to little girls who orgasm without Daddy’s permission?”

“Daddy’s going to make you come so hard you scream.”

“No, please, I can’t.” She shuddered against him, but he held her firm and struck her thighs again. With a moan, she collapsed over his lap.

“Yes, you can. And you will for all these people watching you.” He squeezed her hot cheek and she moaned. “They want to see a very naughty girl get punished.”

“Ah!” She groaned when he tickled her clit and pinched it.

He took a bit of her moisture from her nether lips and ran it along her puckered back hole, and her whole body tightened in response.

2017-03-05
Chris
Previous: Summoned for Discipline by Jane Fairweather
Next: Tamed by the Sheikh by Emily Tilton