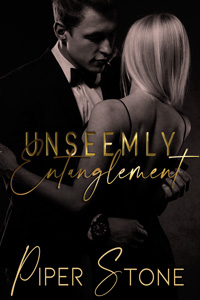 His offer made me blush. Taking it made me his.

I was warned about Frederick Duvall. I was told he was dangerous. But I never suspected that meeting the billionaire advertising mogul to discuss a business proposition would end with me bent over a table with my dress up and my panties down for a shameful lesson in obedience.

That should have been it. I should have told him what he could do with his offer and his money.

I could say it was because two million dollars is a lot of cash, but as I stand before him naked, bound, and awaiting the sting of his cane for daring to displease him, I know that’s not the truth.

Publisher’s Note: Unseemly Entanglement is a stand-alone novel which is the third entry in the Dark Overture series. It includes spankings and sexual scenes. If such material offends you, please don’t buy this book.

“Move to the center of the table,” he commanded, his request completely unexpected.

He gave me a harsh look, shaking his head. “Never question my demands, Shannon. This is your final warning.”

Panting, I struggled to comply, sliding backward then resting my head. What the hell was he planning?

“Close your eyes and keep them closed,” he added, remaining in the shadows as he usually did.

After taking several shallow breaths, I did as he asked, trying to remain calm.

“Arms over your head.”

His tone of voice was sensual, so commanding, the hint of danger boosting the level of excitement. When I slipped my arms over my head, I lowered my legs, trying to pretend this was a normal event.

“Tsk. Tsk. Return your legs to the original position. I need to see your glistening pussy. The sight entices me,” he whispered in a deeper, more seductive tone of voice.

I realized I was shaking as I tried to follow his orders. I’d never felt so open or exposed in my life. After a few seconds, I realized he was going to make me wait, testing my patience. Then I sensed him as he moved closer, taking his time walking all the way around the table before stopping beside me. When he brushed the tips of his fingers across my chest, I held my breath.

“You have beautiful yet delicate skin. Perfect in every way.”

I wasn’t certain if he wanted me to say anything. “Thank you.”

“Mmm… Pleasure and pain. The combination is also perfect. Wouldn’t you agree?”

“Soon, you will learn.” He swirled the tip of his finger around my nipple, pinching and twisting lightly.

The discomfort was instantaneous, but almost immediately sweet bliss followed. I arched my back, biting my lower lip. He chuckled, raking his manicured nails to my other breast, repeating the action. While my breathing remained ragged, I felt so alive, burning with energy.

“When you do, you will never be able to accept anything less. Breathe for me, Shannon. And relax.”

I did as he asked, now able to take deep, even breaths. There was a sudden sensation, one that added to the confusion. I twisted my head toward him, trying to figure out what he’d done. Then as I felt it again, I realized. He was pouring drops of hot wax on my breasts.

“Interesting.” Several other drops fell directly on my nipple, the first hint of discomfort not unpleasant. When I moved my arms, all he had to do was growl. I shifted them back into place, intertwining my fingers together.

Several additional drops were trickled over one nipple then the other. I was shocked how filthy and delicious the sensations were.