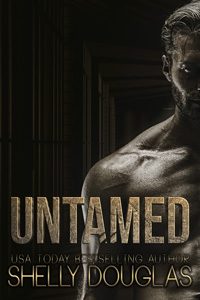 She didn’t obey the FBI’s rules. Now she’ll have to obey his.

When twenty-four-year-old FBI agent Mia Gates is tasked with a high-stakes interrogation of a mafia boss, she finds herself working under the authority of Brendan Norris, an old-fashioned cop who makes it clear she’ll do things his way or she’ll do her questioning with a sore backside.

Mia’s freewheeling style clashes with her ruggedly handsome partner’s by-the-books approach, and she soon ends up with her nose in the corner, her cheeks blushing, and her well-punished bottom sore inside and out. Despite her humiliation, however, Brendan’s firm-handed dominance arouses her deeply and it isn’t long before she is begging to be claimed hard and thoroughly.

Her need for him grows stronger every day, but when the investigation puts her life at risk Mia sees a side of Brendan that she hadn’t before. As he takes it upon himself to keep her safe, she begins to realize there is something different about him. Something wild, feral, and untamed…

She stretched a hand to rub her smarting ass, but he caught her delicate wrist and pinned it to her back. “There’ll be none of that, young lady. Right now, I want you to stand up, move to the middle of the bed, and place your bare red behind over that brand-new pillow. This tight ass of yours needs to be widened before I…”

Her eyes immediately darted over to a rectangular piece of blue foam that he had previously set on the mattress. She’d noticed the odd-shaped pillow when they walked into the room together, but never gave a second thought as to why it was there. Instantly, apprehension pulsed through her veins as she stilled and found it difficult to breathe, let alone move off his lap. “Before you… what?” Her voice became so small, she barely recognized it.

His meaty palm slapped the top of her right thigh. “I was going to surprise you, but now that you’ve asked—here’s a quick preview of things to come.” Smoothing his hand around her silky auburn hair, he twisted it around his fist and pulled her head up to meet his feral stare. “After I watch you stand in the corner with a well-strapped backside, I’m going to mount your disrespectful ass and fuck you with my throbbing cock until your knees buckle,” he said, his nostrils flaring as he took a dramatic inhale of air.

Though his words caused her cheeks to flame with humiliation, her clit quivered uncontrollably with desire. What was happening to her? Was she losing her mind?

“There’s no point in denying it, because I know my dirty little FBI agent wants me deep inside every virginal inch of her. The air has been heavy with your sweet scent since your panties came down, but pleasure will only come when you follow my directions.”

A sensation of unadulterated lust fluttered deep in her core. “How could you know…”

As her face continued to burn with embarrassment, she figured it was probably the same shade of red as her ass. “Y-yes.”

“Whether you like it or not, you’re going to learn how to obey me.” His determined voice was hoarse as he boosted her hips high off his lap. “The sight of your pretty wet pussy is making my cock hard as a rock.” He tapped her slick slit. “But unfortunately, only my mate should be fucked in her needy cunt.”

Her heart pounded relentlessly, and a low moan escaped her lips.

“Now, now, don’t fret. I’m going to give that insolent ass of yours all kinds of attention. And from now on, whenever I punish you, you’ll refer to me as Daddy.”

Mia’s shaky fingers touched the smooth tile floor as he yanked the panties from her feet, and a whimper emerged from her dry, open mouth as she felt the impressive bulge in his crotch twitch against her abdomen. “You’re a fucking animal,” she whispered, knowing the essence of her dripping labia was filling the air.

His silence was deafening, as he obviously pondered the truth of her retort. “After that tight hole of yours is brimming with a steel plug, you’re going to stand in the corner and beg your new daddy to give you a solid strapping with his belt. You certainly deserve a good thrashing for your performance today.”

Her chest rose and fell anxiously as she listened to his deep growl rumble noisily, and then he smacked her ass while reciting three short words…