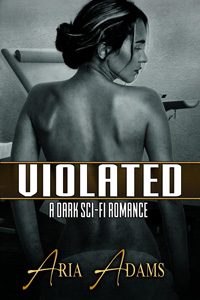 Isla
I can barely remember my life before I was taken to the breeding facility. For two years, I’ve been kept naked and helpless as they probed me, violated me, and used me.

But this new doctor seems different than the ones before him. He has dragged me from my broken shell and captured my attention so that I truly blush as he examines me. When I attempt to escape he punishes me harshly, but the pain and humiliation leave me burning with need. I’ve even begun to think he might care about me.

Adam
I didn’t plan to fall in love with one of the girls held captive here. I have no more choice about my role in all of this than she does. But to keep her safe, I will have to teach her to obey.

Publisher’s Note: Violated: A Dark Sci-Fi Romance is a stand-alone novel which is the second book in the Stolen Future series. It includes spankings and sexual scenes. If such material offends you, please don’t buy this book.

“This is ginger,” the doctor said. “It’s going inside your ass. When it does, it will burn like nothing you’ve ever experienced before. I want you to remember two things while your ass accepts this: One, I have a freezer in my medical office. Ginger freezes, and I don’t have to thaw it before I put it in your ass. Two, I also have a hot plate. I can make the ginger warm. Bear these in mind and think very long and hard about how you want to behave in the future.”

It got worse, and all I thought about was that horrible ginger, eating at my insides as it sat there. What would it do to me? Would I ever be able to use the bathroom again? I had no idea if this had any long-term effects and that terrified me, as much as my fear of how much worse the pain would get.

I cried. I couldn’t not. The burn was too great. As the tears ran down my face, I was horrified to discover that liquid was escaping from my pussy. The juices from the ginger ran down my slit and stung against my clit, but beneath the burn, my sex seemed to swell until my pulse beat in my pussy lips.

What was wrong with me? Was this what the doctor had meant when he said he would train me? That he would make something hurt the exact right amount that my brain flipped it around from pain into pleasure? Distantly, the agonizing burn of the ginger still haunted my thoughts, but it was like it was happening to someone else, who was also me. I didn’t understand this at all.

My nipples were so hard and sensitive that I didn’t just want relief, I needed it like I’d never needed anything before in my life. I arched my spine and the rough fabric of the quilt chafed deliciously against my breasts, sending explosive heat straight to my pussy.

“Bad, bad girl,” he breathed into my ear, then swatted my ass. The pain exploded on the surface at the same moment that my ass inadvertently clenched against the ginger, and I moaned because the gnawing burn in my bottom hole suddenly got a lot worse, but at the same moment my ass cheeks glowed sensually.

The ginger attacked my butt for the longest time of my entire life, but I think it was really only about ten minutes or so. When the doctor came to remove it, I tried really hard not to clench against it even though my ass wanted to fold in on itself until it disappeared.

I remained where I was and waited for the next thing. It turned out that the next thing was the doctor’s hands on my hips, the tip of his cock positioned against my entrance, as I silently begged him to fill me.

“One day I’m going to fuck you,” he told me quietly, as his cock pulsed against my hole. I didn’t doubt it. I was a prisoner in this place, and he could do whatever he wanted with me. “And you’re going to like it,” he added. That I didn’t believe. I still wanted it, though, and my body ached for him to take me.