Violated Locks Up a Top 100 Spot 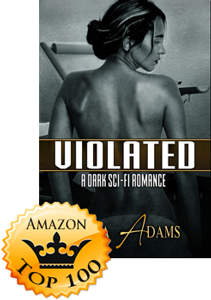 Aria Adam’s new book, Violated: A Dark Sci-Fi Romance, has made the Top 100 in the Science Fiction Romance category on Amazon! Congratulations, Aria!

★★★★★ Clara @ Amazon.com “Excellent story” on February 17, 2018
I enjoyed this story. I really like dystopian/post-apocalyptic stories and I like stories with kink, so this hits all kinds of good places for me.

The government of Telona has kept Isla imprisoned in a breeding farm, where she’s been artificially inseminated and cut open to take her babies away from her. One day she wakes up and is able to escape.

Adam has been imprisoned in the breeding farm as well. He’s a doctor and is there to make sure that all the women who are there are as healthy as it is possible for them to be. He thinks there are all brain-dead since that’s what he’s told. However, when Isla talks to him, he’s totally surprised.

She manages to get free, but she is taken to Adam, who tells the guards that he will train her to obey. The second he gets her alone, he starts plotting how to get away. He wanted to escape anyway, but there is something about Isla, so he wants to make sure that she goes with him.

This isn’t just a kinky story, it’s also kind of a coming-of-age story. Isla grows and matures during the whole book and it’s really interesting to watch that happen. There’s also the whole road trip aspect to it. A great story with a lot of awesome layers and aspects. I have really enjoyed the series and I’m looking forward to seeing what comes next.

★★★★★ Anna Kay @ Amazon.com “So different… So good!!!” on February 18, 2018
This book is delicious and so different. It is set in the same world as Hunted (formerly titled The Last Rancher). You don’t have to read that book as it has different characters, but I say do it as it is also an awesome story and helps understand the overall backstory. This story is suspenseful, angsty, sexy, and just *so good*. This book has so many facets: It’s a dystopian novel. It’s a book about conflicting desires. And it’s a book about transformation and change. I don’t want to give anything away, but right from the beginning, meeting Isla, trapped, mute and practically paralyzed in a bed kept as a drugged up womb… the book had my utter attention. Of course there are delicious sex and discipline scenes. But even better is that these are paired with everything else! I am also guessing that there are going to be even more of these books. Don’t worry, no cliffie, just an overall story that is asking to be told. I, for one, can’t wait! FIVE STARS✨ ✨

★★★★★ Renee @ Amazon.com “Dark done right!” on February 21, 2018
This author just keeps getting better and better. A deliciously dark story. The world building is so unique and the premise is creative. A well written story of redemption and new beginnings. An emotion-filled story that will absolutely pull at your heartstrings. Isla works so hard to find herself and her purpose. You just want to hug her. I could not put this book down.