Visits to the Headmistress by Jane Fairweather 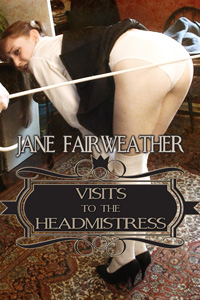 This book includes several short stories concerning the punishments received by misbehaving English sixth-form schoolgirls during visits to their headmistress. Additional stories provide the perspective of a firm but fair headmistress as she administers the discipline necessary to keep up the high standards of her school.

Letting the School Down

A modern-minded headmistress tries to stay neutral while dealing with a feud between the games mistress and the captain of the school hockey team, but in the end the girl’s unladylike language makes a caning inevitable.

After winning the house cup for netball the girls of Cavell House behave wildly in the common room, to the point that their house mistress finds herself obliged to cane the principle culprit.

A head mistress who does not believe in corporal punishment for girls is forced to make an exception after mischief by some of her students on a school trip risks damage to the school’s reputation.

When several of her students are accused of arson after an ill-advised excursion with boys from a nearby school, a headmistress is forced to decide whether to leave the issue to the police or take the matter of a proper punishment for the girls into her own hands.

On her final day at her school, a retiring headmistress recalls having to cane two girls for bullying on her very first day at the school many years ago.

The Well of Loneliness

With the help of a shy sixth-form girl, a headmistress uncovers the bullying of a lesbian student and then deals sternly with the culprits.

A teacher-in-training is falsely accused of theft and receives a hard spanking, after which she must explain to her headmaster why she has ceased attending church.

The passing of her old headmistress prompts a distinguished professor to remember vividly a punishment she received long ago during her school days.

Publisher’s Note: While the stories contained in Visits to the Headmistress share a school setting, it is made clear in all of them that the characters are over the age of eighteen. In addition to realistic depictions of corporal punishment as it was used in English schools in past years, some of the stories also include sexual scenes.

“My kni-knickers? Please, Miss Carter, I’ve only got my vest and knickers on.”

“Yes, Miss Miller, your knickers. And then give me whatever you have got inside them.”

There was a distinct pause as if Rosemary could not bear to display her lower parts naked, but in the end she gritted her teeth, undid the buttons, and very slowly and embarrassedly slid the knickers over her thighs and knees and then her feet were stepping out of them one by one. She very hurriedly held them up in front of her, but Miss Carter caught a glimpse of some very lavish and curly pubic hair, which she reflected somehow reminded her of those involved events when she was eighteen and twenty, which still haunted her, though she usually preferred to forget them; it seemed such a long time ago. Rosemary held out two sheets of blotting paper.

“I am sorry, miss; somebody came past and asked if there was anything they could do to help and I did not like to turn it down, miss.”

“No doubt you did not wish to be rude!” Miss Carter remarked with faint amusement. “Well, that is not a bad joke in the circumstances. But I am not going to let you off a bare bottom thrashing. That, after all, is what you did to Miss Smith with all the embarrassment and pain and humiliation that goes with it. Put your knickers down on my desk and bend over, girl, hands on your knees. You will have two extra strokes for the blotting paper.”