Don't Miss
Home / Blog / Under His Watch by Emily Tilton

Under His Watch by Emily Tilton 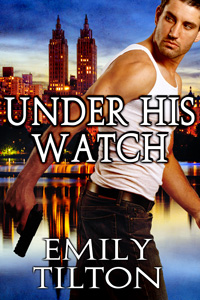 Charity Phillips is not one to shy away from trouble, and the twenty-two-year-old activist makes powerful enemies when she shoots a film exposing the effects of a mining operation on priceless archaeological sites. After she receives a death threat, her anxious father informs Charity that if she wants his continued financial support she will have to get used to living under the protection of a full-time bodyguard, former Navy SEAL Ryan Bedford.

She grudgingly agrees to Ryan’s presence in her home, but matters quickly come to a head when Charity goes out for drinks without notifying Ryan of her whereabouts. To her shock, upon returning home Charity soon finds herself bent her over her own couch for a long, hard, bare-bottom spanking. Enraged and also horrified that a part of her was excited by his punishment, Charity tells Ryan she never wants to see him again.

The danger suddenly feels much more real when her computer is hacked and she receives another death threat, however. She begs Ryan to return, though she knows it will mean submitting to both his rules and his discipline, and when Ryan takes Charity into his arms after a sound spanking she cannot help craving not only his protection but his dominance as well. But can Ryan truly keep Charity safe from those who would do anything to silence her?

When he saw just how incredible Charity looked naked, even seen only from the back, Ryan knew beyond a doubt that he had gotten himself into a world of complication. He took a deep breath. Then, in a fruitless attempt to distract his attention from the raging erection that had developed as soon as he entered the room and caught a glimpse of her pert little backside, he went back over his reasons for telling her that she needed to be naked for this punishment.

He had not thought it through as well as he might have, he supposed, but his reasons were good—professional, in fact. Now he just needed to stay inside that professional mindset, and show Charity exactly how seriously he took his duty to keep her safe. He had made Laura take everything off for her serious punishments: Ryan really did believe strongly in the power of the contrast between clothed and naked to deliver the sort of message a punishment needed to deliver. And he knew for certain that Charity needed to hear that message; she had to understand that from now on, as long as she needed Ryan’s protection, he wouldn’t hesitate to punish her by tanning her hide and embarrassing her with enforced nakedness.

“Turn around, Charity,” he said, sitting down in the high-backed wooden chair. This would be the hardest part, and Ryan wanted to get it over with quickly. Charity must grasp that her protector would put her on display and examine her, when he chose. She would have no secrets, because Ryan needed every bit of information he could get to make sure she stayed in one piece.

But when she obeyed him with a little sob of humiliation, of course his body’s response was immediate and not completely comfortable. He wanted her; there was no way around it. Charity Phillips was a beautiful naked girl, standing there covering her pussy with one hand and her breasts with the other, and he had been the one to take her clothes away. As a dominant man, Ryan couldn’t help feeling the urge to take her in hand not just in a protective way, but completely. He wanted to possess her, and to train her to please him, the way he knew how to do both for his enjoyment and for hers.

No, he couldn’t help feeling that urge—but he could decide what to do about it.

He looked into her troubled blue eyes. “Charity, put your hands at your sides, please.”

“Because I have to make the point to you that you don’t have secrets from the man whose job it is to protect you.”

Charity’s eyes widened and her brow puckered. She clenched her fists, and then lowered her hands to her hips, still balled up as if in frustrated defiance. Her breasts were small, but perfect. Her pussy, covered with sweet golden curls just a shade darker than the hair on her head, made him think, illicitly, that if she belonged to him he would have her wax, and leave just an adorable little lock of hair to point him toward her clit so that he could make her scream with pleasure.

“I’m going to spank you now, Charity, to teach you about being a good girl for me. Come here and stand on my right side.” He patted his denim-covered right thigh to show her where to go.

“Yes, sir,” she said very softly, and began to walk slowly toward him.