Wedded to the Warriors by Sara Fields 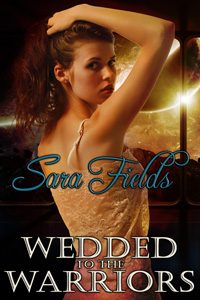 As an unauthorized third child, nineteen-year-old Aimee Harrington has spent her life avoiding discovery by government authorities, but her world comes crashing down around her after she is caught stealing a vehicle in an act of petulant rebellion. Within hours of her arrest, she is escorted onto a ship bound for a detention center in the far reaches of the solar system.

This facility is no ordinary prison, however. It is a training center for future brides, and once Aimee has been properly prepared, she will be intimately, shamefully examined and then sold to an alien male in need of a mate. Worse still, Aimee’s defiant attitude quickly earns her the wrath of the strict warden, and to make an example of her, Aimee is offered as a wife not to a sophisticated gentleman but to three huge, fiercely dominant warriors of the planet Ollorin.

Though Ollorin males are considered savages on Earth, Aimee soon realizes that while her new mates will demand her obedience and will not hesitate to spank her soundly if her behavior warrants it, they will also cherish and protect her in a way she has never experienced before. But when the time comes for her men to master her completely, will she find herself begging for more as her beautiful body is claimed hard and thoroughly by all three of them at once?

Publisher’s Note: Wedded to the Warriors is a stand-alone novel which is the first book in the Captive Brides series. It includes spankings and sexual scenes. If such material offends you, please don’t buy this book. Also note that this book was previously published under the title Claimed by the Savages.

“First, let’s power on the computerized chair. You mentioned you wanted to test the receptiveness of her bottom hole, so let’s get that done right away.”

“Yes, thank you. It’s an important aspect as myself and her other mates will wish to claim her there.”

Roberts hooked up the chair to a nearby compressor unit and pressed a few buttons. The chair that Aimee was restrained on began to hum as the inner hydraulics came to life. Suddenly the seat shifted and transformed, flipping her body upside down so that she was bent over in an A-frame position. She shrieked as the contraption moved her body outside her control and Tobias drew in a breath at the sight of her delectable bottom cheeks quivering nervously before him as the chair stilled. Bent over as she was, arms over her head and her legs parted so that he could see her pretty pink pussy, her ass looked delectable. Both cheeks were very well rounded, with plenty of meat for him to hold as he drove hard into her channel.

He could see the entirety of her secrets, from her inviting slit to her tight little star leading to her naughtiest entrance. There was no doubt in his mind that he would take her there sometime soon. But she wasn’t ready yet; she would have to be trained there first before she could take his cock, Luke’s, or Cole’s.

The doctor moved a sheet off the cart, uncovering a rod-shaped object that was connected via a wire to a nearby computer as well as a decently sized butt plug that would soon be testing her likely very tight bottom hole. He licked his lips at the thought.

“May I?” Tobias asked, wanting to take an active role in his mate’s examination.

“Of course. Beside the plug here,” he pointed, “there is ample lubricant.”

Aimee whined as his fingers drifted up the back of her thigh and her bottom clenched as he brushed against the lower curve of her bottom cheek.

“Don’t you fucking touch me, you bastard!” she yelled out, her voice angry and defiant.

Smirking, Tobias immediately clapped his hand down hard on her ass, spanking her back and forth quickly and without delay. There was no way he would allow her to speak like that to him, and he knew Luke or Cole wouldn’t stand for it either. On his planet, she’d be spanked for such naughty behavior. It was the Ollorin way of life.

2017-02-05
+admin
Previous: The Wolf’s Mate by Vonna Harper
Next: The President’s Little Sweetheart by Shelly Douglas