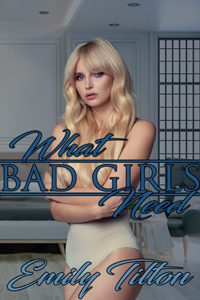 After she is caught stealing from her company, Drina Peterson knows she is in trouble, but she has no idea how much. Only when three stern, handsome men strip her bare during the drive to a special correctional facility does she begin to realize she is about to get what bad girls need.

Though a painful, humiliating strapping leaves her with blushing cheeks and a burning backside before she even arrives at her destination, Drina cannot hide her helpless arousal when her captors make it clear that she will be calling them daddy from now on, and her need for them only grows more intense as they punish and master her in the most shameful ways imaginable.

As her naked, quivering body is brought ever closer to a shattering climax but never allowed over the edge, Drina soon finds herself longing to be taken hard and thoroughly, even if it means begging her new daddies to spank her until she is red and sore and ready to be claimed.

Publisher’s Note: What Bad Girls Need is the second entry in the series The Institute: Bad Girls. The books of this series are stand-alone novels which share the same near-future setting as The Institute Series. What Bad Girls Need includes spankings, sexual scenes, intense and humiliating punishments, and strong D/s themes. If such material offends you, please don’t buy this book.

“No! Wait… please!” Drina yelled. Now she struggled desperately, but to absolutely no avail. Brian’s strong arm and leg held her immobile over his knee, and her cuffed hands, stretched out to touch the back of the driver’s seat, couldn’t help her at all.

Quint kept raising the dress, and Drina felt the air moving freely between her legs, and she knew they could see the lacy purple thong she had worn in expectation of seducing Bradley Marsden.

Officer Brian spoke for the very first time, then. His voice was very deep—so deep it seemed to shake Drina’s whole body.

“Sure are,” Quint said. “I bet they’ve got that mesh in the front, too, right? The kind that lets you see the cunt through them. Some New Modesty girl.”

That made Drina sob into the vinyl of the bench seat.

I thought the woman on the phone was going to save me from… this.

“Is that right, Drina? Is there mesh on the front of your panties, so a man can see the cunt he’s going to fuck?”

Drina could only give another sob in response.

“That bottom’s pretty bare already,” Quint said, presumably to Brian. “Go ahead and start whipping her, and we’ll see if she wants to tell us about her sexy panties.”

“No!” Drina cried, writhing over the guard’s muscular thigh, but the redheaded man’s hand held her down, his leg pinioned hers, and she heard a terrible swishing sound and then an even worse crack. Her bottom bucked in agony at the fiery line the strap had made across it, and she screamed in pain, but Officer Brian clearly liked to whip girls hard and fast; another lash landed in almost the same spot a moment later, and then another. Drina’s hind-cheeks clenched in agony, and her hips rode the guard’s thigh like a desperate horsewoman trying to escape the fire blazing behind her.

“We haven’t even started punishing you for not getting up when I told you to,” Officer Quint said conversationally. “We’ll start that after you tell us about your panties, and I pull them down to make sure you’re telling the truth.”

“And see whether you’re wet,” Officer Brian put in, in his rumbling voice.

Without any discussion between the guards, Brian brought the strap down again across her backside. Drina shrieked in response, and then she started to say that she would do it, but the guard whipped her again and again, until all she could do was scream because her bottom hurt so much.

“They’re mesh!” she yelled when she could find her breath, after Officer Brian seemed to have paused again.

“Thought so,” Brian replied, and then she felt Officer Quint’s hand again, and she knew he would pull down her lacy panties but he didn’t—he did something much worse, instead. The enormous hand went between her legs, over Officer Brian’s thigh, and the big fingers twined around the elastic edges of the mesh panel at the front of the tiny panties and took her lightly furred pussy in their firm grip.

The fingers squeezed, and two of their tips found Drina’s clit. She cried out in a very different, a shamefully different way, and suddenly the needy part of her betrayed the rest of her completely. The awful pain in her bottom-cheeks seemed to become something else, something different that Drina refused to name. Even though she wouldn’t name it, though, her body’s response clearly didn’t need any verbal specification: her hips moved lewdly and she felt her arousal flow into the guard’s hand.

“That’s nice and wet,” Officer Quint said. “At least that’s the way a New Modesty girl should be when she gets punished for wearing naughty panties.”

2019-06-15
Chris
Previous: Tamed by Her Mates by Sassa Daniels
Next: Rough Alpha: A Bad Boy Shifter Romance by Maggie Carpenter