Don't Miss
Home / Blog / What She Was Missing by Vivian Phelps

What She Was Missing by Vivian Phelps 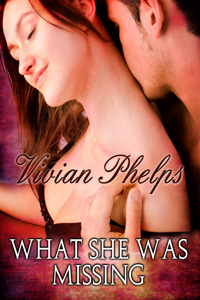 Rebecca Stafford had it all together. She was the one of the up-and-coming lawyers in her firm, she was making great money, and she was known as a girl who could party just as hard as the boys. Then Mark Venard came along and made a mess of things. Suddenly, someone in her life was demanding that she take a few hours off work now and then to have dinner with him.

She wasn’t the slightest bit used to having to answer to a man like Mark about anything, and she certainly wasn’t used to being taken over a strong man’s knee for a bare bottom spanking when she behaved like a spoiled brat.

As Rebecca and Mark grow closer, she knows that she must find a balance between her long work hours and her growing desire to spend time with him, but will she come to terms with her feelings or will Mark’s firm discipline drive her away?

Rebecca drove straight to Mark’s condo, ran to his door, and breathlessly rang the bell. She straightened her blouse and skirt as she heard heavy footsteps pounding to the front door. It opened with a jerk. There was Mark, still in his work clothes, looking very handsome and mad as a wet hen. He scowled at her.

She stepped inside. “I’m sorry, Mark,” she said, and gave him a peck on the cheek. His face softened slightly.

He said, “I was starting to get worried, that’s why I called your office. I was imagining you lying in the street after a car accident or something.” He shook his head. “Jesus, first I got scared but now I am just mad.” He gripped her by the arm, pulled her into the foyer and slammed the front door.

He wrapped her in his arms and kissed her. Rebecca draped her arms around his shoulders and kissed him back. He smelled delicious—a combination of male sweat, slightly stale cologne, laundry starch, and whiskey. As he kissed her, his hands skimmed over her body and settled on her ass. He squeezed her tightly and pinched her buttocks through her clothes. Their kisses deepened.

He led her to his bedroom, and she willingly followed. Once there Mark pulled the vertical blinds closed and returned to Rebecca. He unzipped her skirt and let it fall to the floor, then Rebecca stepped out of her shoes. Mark hooked two fingers in the waistband of her panties and pulled them down to her ankles, and he steadied her as she stepped out of them. When he stood up he put one hand on each side of her face and kissed her wet, puffy lips.

While kissing her, his hand traveled down to her clit and Mark caressed her softly and lightly. Rebecca stood still and breathed deeply. Mark put one hand on her backside for balance and fingered her more determinedly. Rebecca slouched out of her business jacket and pulled her sweater over her head, and Mark stopped what he was doing and turned her around to unhook her bra. When it fell to the floor, Rebecca delighted in being completely naked in front of him.

Mark stepped back and looked at her. He ran his gaze over every part of her and then his eyes met hers, and she saw that his dark features were consumed with desire. Slowly, he knelt before her and his mouth met her clit. It took her breath away. Holding her hips, Mark sucked and licked and devoured her. She opened her stance to allow him better access, and he used his tongue on her button while forcing his fingers into her vagina. He was merciless. He used her shamelessly, prodding and poking, and all the while holding her in a vice-like grip. Rebecca was overcome; she was close to climax and moaning. She felt weak in the knees and let them buckle somewhat, but Mark stopped her. “Stand up!” he commanded gruffly.

She tried harder and realized he was taking her to climax right there. He wouldn’t allow her to sit down or lie down. Using his thumb he rubbed her clit nearly raw—it almost hurt, but not quite. Rebecca arched her back and was racked by a huge climax. Every part of her body shook and shuddered, and only when it was finally finished did Mark allow her to sink down to the floor.