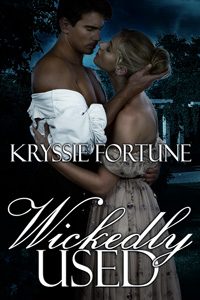 While he is no stranger to pleasurable company from ladies of the night, Major Richard Rothbury of the royal dragoons is not the kind of man who will stand idly by as a woman is taken against her will, and when he witnesses a disreputable cad attempting to force himself on a girl in a back alley, he does not hesitate to intervene.

But after the grateful young woman offers herself to Rothbury, he is shocked to discover that not only was she no harlot, she was a maiden and he has deflowered her. Furious at the girl’s scandalous behavior and her carelessness with her own safety, Rothbury chastises her soundly.

Though she is due to inherit one of the largest fortunes in England, the fact that she cannot touch the money until she marries or turns thirty has kept Elizabeth completely at the mercy of her cruel uncle, and for years she has been treated as if she were a servant. Her encounter with Lord Rothbury is by far the most exciting thing that has ever happened to her, but while he shows great concern for her safety, he refuses to believe that she is anything more than a serving girl.

Despite having made it clear that he doesn’t consider a match between them to be possible, when Elizabeth disobeys him Rothbury proves more than ready to strip her bare, punish her harshly, and then enjoy her beautiful body in the most shameful of ways. But can she dare to hope that he will one day make her his wife, or is she destined to spend her life being wickedly used?

“Go into the tack room and undress. Once you’re naked, stand in the corner with your nose against the wall.”

What? Why would I do anything so senseless and demeaning? “Have you run mad? I’m not undressing for you anywhere, least of all where anyone can walk in.”

He looked like an ice demon out for vengeance. His intensity made her quake inside.

Clearly furious, he turned toward her. “Last night, I promised you I’d blister your behind if you didn’t mend your ways. Do as you’re told or your punishment will be ten times worse.”

She looked toward the stable entrance and considered bolting. Whatever Rothbury had planned, it would make her behind sore. Only, his gaze held a promise of something sensual and wicked.

She walked into the tack room like a temptress teasing her lover. Head high despite her fears, she slid her arms out of her woolen gown. Kicking off her shoes, she pulled her coarse linen chemise over her head. Vulnerable but excited, she stood naked in a public stable.

The thought of strangers walking in on her and Rothbury felt wicked but titillating. Her gaze shot between the rear corner and the door, but she’d made her choice when she stripped off her clothes. Slow and reluctant, she moved into the corner and stood with her nose against the wall.

She shivered with anticipation. Her pussy grew damp with need. Where is he? And what will he do? How long will he leave me standing here like this? The tack room door closed with a bang, but she stayed with her nose to the wall and waited.

She heard Rothbury moving behind her, but he didn’t speak. Finally, he moved so close that he pressed her bare body against the wooden wall. Something, maybe his cravat, covered her eyes and the world went dark. Shivers of anticipation ran through her body.

He penned her in the corner and pulled the pins from her hair. Turning her, he bound her wrists before her in what felt like a length of leather leading rein. After checking it wasn’t too tight, he put one arm around her waist and walked her to the center of the room.

Pulling her arms overhead, he fastened the leather strap around her wrists over a hook in the ceiling. Stretched out for his pleasure, she couldn’t move. Arms bound overhead, blindfolded, and naked, her excitement mounted as she wondered what he’d do next.

He stood behind her and lifted her hair. One kiss on the back of her neck had her ready and eager. He kissed her again then a growl rumbled around his chest. “I’m going to punish you like no one’s ever punished you before. Your body belongs to me until I release you. I will stroke and caress your nipples until you beg for release. I will tease and torment your sweet cunt until you scream with need. Your body will drip with liquid desires, but I won’t let you come until I’m ready. Even then, you will have to beg.”

2018-02-17
Chris
Previous: Conquered by the Viking by Ashe Barker
Next: Violated: A Dark Sci-Fi Romance by Aria Adams