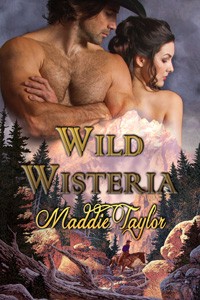 Luke Jackson is drawn to beautiful, impetuous Wisteria Turner from the first moment he sees her. She is alone in a strange town and in trouble with the law, and she is reluctant to trust anyone, but Luke is not a man who backs down from a challenge. He is bound and determined to give Wisteria the help she needs, even if that means giving her a good, hard spanking to get her attention first.

Despite her hesitation, Wisteria is swept off her feet by Luke’s chivalry and bold dominance, and she finds pleasure in his arms like nothing she ever imagined. But after a night of incredible passion, a horrible misunderstanding shatters their newfound romance and her fragile trust. She flees Luke’s loving arms, only to encounter hardships, danger, and much more trouble than she bargained for.

When circumstances force Wisteria to return to Luke’s hometown, she does her best to keep the secret she has hidden since that night. Once the truth comes out, however, Luke puts his foot down. He makes it clear that he’ll be watching out for Wisteria from now on, whether she likes it or not. But can she ever truly set the pain of her past aside and embrace the promise of this good man and his loving family? Or will her wild nature continue to put up fences that will forever keep them apart?

She felt the string at the back of her drawers pulled free and the material tugged downward. He didn’t stop until the cotton was a bunched-up wad of fabric around her lower thighs, and no barrier at all to either his gaze or the brush of his large hand. Her hand flew back to cover herself.

He captured her wrist and moved it out of his way, holding it alongside her hip. “I’m a believer that a woman is never too old for a good old-fashioned spanking, and you, Mrs. Jackson, more so than anyone, have a meeting with both my hand and a hairbrush that has been a long time in comin’. Now be still and take your well-deserved punishment like the grown woman you claim to be, lest I add a few strokes with the razor strop I keep in the bathroom.”

“Obviously, your recollection of that long-ago night in the barn is a bit muddled. I dare what I please, wife. You don’t know me well enough to understand that, but you will. And tonight is the first step in that direction.”

He was done speaking after that as his open hand came down in a sizzling slap across her bottom. It was followed quickly by another. Soon a series of smacks rained fire down on the twin globes of her exposed and vulnerable behind. Muffled oomphs and squeaks slipped between her closed lips as she tried to keep from waking Micah. The onslaught, however, was too intense and she found it difficult to keep still and quiet.

“As intended, darlin’. It’s a spanking, after all.”

Biting her lip, she resigned herself to endure, but he redoubled his efforts on a particularly sensitive spot, down low where the curve of her cheek met her thigh, delivering a flurry of heat in alternating explosions until she cried out.

“I believe that you are, but I’m not done quite yet.”

2015-11-22
+admin
Previous: The Alien’s Pet by Loki Renard
Next: Assigned a Daddy by Emily Tilton