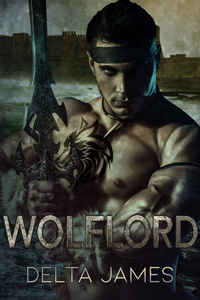 She fought him. He claimed her anyway.

Ruari of Clan Dundalk knew Arielle was his mate as soon as he set eyes on her, but he had planned to court her properly. When she arrives in his lands as an uninvited stowaway, however, he decides it is time for this beautiful, headstrong female to be taught her place over his knee.

As she is led to her new mate’s castle naked, blushing, and sore, with only a sheet to hide her helpless arousal, Arielle’s fury at being bared and spanked is exceeded only by her desperate need to be thrown to the ground and ravaged by the brute who just punished her so shamefully.

She won’t have to wait long…

Publisher’s Note: Wolflord is a stand-alone novel set in the same world as Warlord and Overlord. It includes spankings and sexual scenes. If such material offends you, please don’t buy this book.

“I fear my once virginal mate is no longer completely sated by my fingers. Would you prefer your mate’s cock to his fingers?”

He removed his fingers from her core and swatted between her legs with more than a bit of sting. She recoiled from the swat momentarily before involuntarily pushing her mons back against the palm of his hand.

She started to growl but ameliorated it into something that vaguely resembled a sigh.

“Please, Ruari, don’t spank me there. I’ll behave, it’s just I want you. I need to feel you fill me up, to stroke me so that all that exists is you and me. Please don’t keep me waiting and don’t make me beg.”

He nuzzled her and smiled at her once more, taking her nipple back into his mouth. He sucked hard and she cradled his head. His hand stole down her body and played again with her clit; she moved in concert with his fondling. As her breathing quickened, he moved from swirling his fingers around her clit to pressing his thumb against it and slipping his fingers back within her pussy. Arielle spread her legs widely and tilted her pelvis in invitation for him to take her in the way only a male alpha wolf could.

She opened her eyes and held his gaze.

“My lord and master,” she said with a sigh.

Ruari smiled, pleased with her response. He moved down her body stopping to kiss, lick, and suck as he did so. He was in no rush and spent considerable time teasing her nipples so that they were both so distended, they bordered on painful. When he’d exacted the amount of frustration and need he wanted from his suckling, he moved further down until finally, he had his head between her legs. Arielle was unprepared when he nuzzled her clit and she once again moved her hips. He swirled his tongue around it and then sucked her swollen nub into his mouth where he nipped and suckled. Arielle gasped in pleasured surprise as the desire inside her heated sheath increased dramatically.

Her hips moved with more strength and speed as she pushed herself against his face. Ruari responded by using his tongue as he had his fingers and plunged it in and out of her. She bucked wildly against his onslaught. Her body stiffened in anticipation, and she began to breathe faster and more shallowly, terrified of the amount of unexpected pleasure this new method of exquisite torture was exacting. Arielle was embarrassed that he could undo her to this extent so quickly and easily. She felt herself rushing again to the edge of the abyss. Before she could do anything to stop it, she felt herself tumbling over the edge.

Ruari raised up and growled appreciatively as he kissed his way back up her body. As he did, he dragged two fingers up the inside of her thigh until he could slip his fingers back into her channel and slowly moved them back and forth as his thumb pressed against her clit. Her body once again ascended to its peak and he settled himself between her legs. He brought both of his hands up to take a firm hold of her hips.

Sensing he meant to breach her with his knot, she stiffened in anticipation of the pain.

“It will be all right, Arielle,” he said in a soothingly seductive voice. “Try to relax, cushla macree. It will only hurt for a moment.”