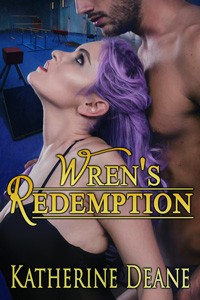 Nineteen-year-old gymnast Wren Montgomery was America’s golden girl, but then it all came crashing down. As far as the media is concerned, it was a devastating ankle injury which began her downward spiral, but in her heart Wren knows better. The truth is that things started going wrong the day her beloved coach Jonathan Reilly not only rejected her romantic advances, but actually spanked her bare bottom as if she were a silly little girl when she tried to hide her heartbreak behind an angry outburst.

Now at twenty-two, after one poor decision after another Wren has become the “bad girl” of the gymnastics world. Desperate to break out of her slump and with nowhere else to turn, she decides to accept help from the best coach she ever had… the same man who spurned and then spanked her years ago.

Jonathan watched Wren’s fall from grace, and he fell with her. He still blames himself for leaving the team—and more importantly, leaving her—and now that he has the chance to help his little rebel get back on track, he isn’t going to let it slip through his fingers. This time he’ll be there for her no matter what, both when she needs a loving embrace and when she needs a firm hand applied to her bare bottom. Most important of all, if she still wants him to be more than just her coach, this time he won’t let anything keep him from claiming what is his.

Her eyes were bright and round, and her chest rose and fell rapidly as she looked up at him from under her thick brown lashes.

They shouldn’t be doing this. But God, he couldn’t control himself. This woman was going to be the death of him. Damn it, let go for once.

“Take that thing off.” He yanked a strap from her shoulder and she complied by tearing off her leotard and jog bra to stand naked in front of him. Her breasts were gorgeous—just the right size for his hands, with perky, rose-colored nipples that peaked in the cool air. He had always been a fan of smaller breasts and how they were sensitive and easy to arouse.

She gasped when he ran the pad of his finger across the pointed tip, twirling and caressing it into an even sharper point.

“Bend over the mat, arms out straight, ass high,” he ordered in a rough voice that almost cracked with his desire.

Her back arched, her nipples grazed the mat, and her swollen, pussy lips wept. The coarse, dark hairs between her legs glistened with her wetness. “Now this is a beautiful sight. But you need one more thing to be perfect.”

“What’s that?” She shuddered as he ran his fingers across her wet pussy.

“A hot, red ass.” He reached into his bag and pulled out his thick leather paddle. “Last chance to get out of this.” He stroked her with the soft side of the paddle, giving her a chance to tell them they were doing something foolish. Her answer came in the widening of her stance and the tilt of her pelvis. Her pink, round bottom was now bared perfectly for him. He liked her reply.

“You are such a little rebel.” He laughed and lined up his first swat.

2015-12-05
+admin
Previous: Claiming Her Innocence by Ava Sinclair
Next: Her Doctor in Charge by Maggie Carpenter