Shared by the Billionaires by Emily Tilton – Extended Preview 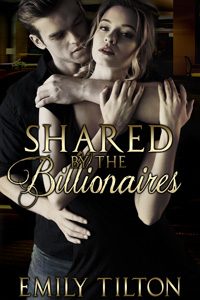 Helen looked at Mr. Lindgren. She felt like her mind had floated completely free of her body, as she came back up into the light after sucking his enormous cock. He had a little smile on his face that seemed to her a greater compliment to the skill she had so desperately wanted to show him than any wolfish grin, or even any flushed look of masculine need. He reached a hand down, to help her up.

“Thank you, sweetie,” he said, as she got to her feet, stumbling a little, her head very light. “Careful. Take a moment before you go over to Mr. Veau.”

His words seemed so polite—so truly polite, as opposed to the politeness of Mr. Serteau, who said please but accompanied the word with other words, of the coarsest kind, to describe her body and her role in his household. But the sense memory lingered, of his huge manhood in her mouth, as she tried to take it all the way to the back of her throat the way Mrs. Foley had taught her, though even Mrs. Foley’s training dildo wasn’t as big as Mr. Lindgren’s cock. The sheer masculine force of Mr. Lindgren’s body seemed to remain inside Helen now, even though he hadn’t let her bring him to orgasm that way, despite the other men all having come in her mouth.

Gently now, with his hands on her waist, he turned her toward her destination. What would happen now, part of Helen wondered? The enormous penis she had sucked was still hard; it would have to go inside her, in her other holes, as Mr. Serteau, called them, wouldn’t it? The idea that somehow she must satisfy Mr. Lindgren seemed to grow within her as she shuffled around the table toward Mr. Veau. Fear and arousal vied in her chest almost as a physical sensation, her heart pounding a staccato rhythm as she thought about how that would come about, and how it would feel to have him take his pleasure inside her pussy, inside the bottom Mr. Serteau had recommended be well fucked today.

Sweetie. He had called her sweetie, and he had helped her up. And the endearment didn’t sound to her like the condescending, degrading way a man would use to put a woman in her place, but like Mr. Lindgren actually thought her sweet.

But he had also said, Let’s put her on the table. What did it mean?

She reached Mr. Veau, a red-headed man in his mid-forties, with a handsome face that now bore the kind of grin she had expected on Mr. Lindgren’s face, but hadn’t seen there.

“Turn around and grab your ankles, slut. Spread your feet. I want to see how wet it got you to suck that huge cock.”

Helen felt her face go red at the awful command, but she had known even before Mr. Potter had mentioned it that she must not have a bad report sent about her to Mr. Serteau. The thought of the caning she would get if any of these men said she had not pleased them properly made the fear grow until it almost blotted out the arousal. At the same time, the little voice inside her—the source of all the thoughts responsible for bringing her here, an indentured concubine—cried out that she must be punished anyway for what she did, for sucking four cocks under the table, for Mr. Veau’s inspection of her pussy as she bent before him, for the terrible things they planned to do on the table.

“How wet is she?” one of them asked, maybe Mr. Klee. Helen couldn’t tell because her face was between her knees now. She cried out as Mr. Veau probed her with one finger, then two.

“She’s pretty wet,” he pronounced. “And you won’t believe how tight this smooth little cunt is. That housekeeper of Serteau’s must know special exercises.”

At these shameful words, Helen felt herself grow much warmer and wetter, and her pussy gave a spasm of need. Knowing that Mr. Veau would see—that he would understand that she had gotten aroused by the degradation—made the problem much worse.

Sure enough, the red-haired billionaire chuckled. “Look at that. She’s gushing when she hears me talk about her cunt.” He worked the two fingers in deeper, and Helen moaned. “Let me show you something, slut,” he said, and pressed at the place inside where Mrs. Foley sometimes did, when she felt like rewarding Helen for pleasuring the housekeeper’s lightly furred pussy.

Helen gave a sharp cry. She struggled to stay upright in the awkward, humiliating position.

“No,” said Mr. Lindgren immediately. Helen felt her eyes grow wide. He hadn’t said anything since he had sent her to Mr. Veau. What did it mean that he wanted to refuse her a climax now? She felt a burning need to know what he intended—was he a cruel man, then? or did he want to spare her the degradation of displaying her helpless, forced pleasure at the lewd Mr. Veau’s command?

Or… did he want to own that pleasure himself? Helen knew—she told herself she knew—that it couldn’t be true, but she found herself moving her lower jaw a little, as if trying against her will to remember how she had managed to receive as much of Mr. Lindgren’s huge cock as she had.

Mr. Veau moved the fingers inside Helen again, and she gave another cry.

“Really?” he asked. “This slut seems like she’ll perform better if we keep her hungry pussy satisfied.”

“No,” Mr. Lindgren said again, a little more casually, as if he felt he had given himself away with his initial quick response. “I think she’ll do better if she doesn’t get to come until we’re through with her.” His words sounded humiliating, but something in his tone seemed to tell Helen that he meant them in a different way from the way they sounded.

“I’m with Eric,” said Mr. Ferrers. “Let’s get her on the table. She doesn’t get a reward until she’s taken our cocks everywhere they can go.”

“Alright,” Mr. Veau agreed. His hand left her, and Helen gave a frustrated whimper. “Waiter, could you help this young lady get up on the table? Helen, you’d better take the panties off so we can see everything a man likes to see.”

He spoke so matter-of-factly and brusquely that the humiliation in his words didn’t even hit Helen until she had fully processed what he had said. The waiter had reached her by the time she had figured out that she must take off the seatless panties, and she looked up at the young man’s leer without knowing what she must do first: lower her shameful underwear or let him lift her onto the table.

“Miss,” the waiter said in that voice that conveys the superiority of the employee of a fine restaurant over young women who have clearly been brought there by well-heeled men who intend to take them to a hotel room and fuck them afterward, “do you need help lowering your panties?”

Helen felt her face go bright red, and she looked from face to face among the four men at the table, all of them smiling. Mr. Veau, Mr. Ferrers, Mr. Klee: their smiles were all rapacious—to tell her how thoroughly they approved of the young waiter’s enforcing their wishes as to Helen’s underwear, and their wishes as to seeing the bare pussy and anus Mr. Serteau had loaned to them for the afternoon.

But Mr. Lindgren’s face was different, just as he had been different about her mouth’s service under the table. He smiled, but his expression as a whole—his bright eyes and his slightly raised eyebrows—seemed to tell her, reassuringly, that it was all a game. A very serious, shameful, grownup game, but one Helen knew she liked to play as much as these men did, even if they had the right, and the intention, to thrust their hardness savagely into her and Helen must receive their penises gratefully, without thought of resisting or withholding any part of her beautiful young body.

She turned back to the waiter, cheeks burning, and swallowed hard. His look of wolfish arrogance made her turn to find Mr. Lindgren one more time and make sure she had seen what she had thought lay behind his eyes. She did see the same reassuring expression, but Mr. Lindgren said, “Take down those panties, please, waiter.”

Helen gave a little gasp at the words, and then another at the feeling of the waiter’s cool, smooth, and very efficient hands as her panties were swiftly lowered to the floor and lay tangled in her black pumps.

“Step out, please, miss,” the waiter said. Then, as he stood up, with the bit of black satin and lace that she had imbued with her arousal so thoroughly hanging from his forefinger, “Which of you gentleman will be taking the panties home?”

“I will,” said Mr. Lindgren, and that brought a surge of heat down below, where the waiter had exposed her, as well as up above.

“I definitely don’t have a collection like yours, Jacob,” Mr. Lindgren said easily. “But I like these very much. Jean, will you consent.”

Mr. Klee chuckled. “It’s alright with me, though I like them too, I must say.”

Mr. Lindgren stood up and reached across the table, and Helen watched the waiter extend his arm in its white jacket, too, and watched her underwear change hands. She took a sharp, involuntary breath at the moment Mr. Lindgren took the panties, and an electric tingle seemed to travel from her clit through her belly and into her chest. Her pussy gave a terrible little clench.

“As long as I get to give the spanking,” added Mr. Klee, as he too watched the panties disappear into the breast pocket of Mr. Lindgren’s suit.

But why? Helen thought. Hadn’t she been doing her best for them?

She felt the young man in the white coat’s hands around her waist, suddenly. She started, turned to look up at him. He looked down with the same lustful eyes. “Put your hands on the table, miss, and climb on up. I’ll lift you.”

Something about the idea of being on the table suddenly seemed to Helen so degrading that she almost tried to get away. But the opposite impulse, to clamber up willingly, with the waiter’s help—to let him serve her body up to these wealthy men the same way he had served the salad and the entree—rose as well.

I have no choice, she thought. They will whip me, and Mrs. Foley will spank me over the stool with her wooden spoon, and Mr. Serteau will cane me, if I don’t get on the table and let them do as they like.

She put her hands on the linen tablecloth, and she suddenly realized that the table was now better dressed—more dressed, anyway—than she herself was, and that sent a wave of heat to her pussy. She remembered the playful look on Mr. Lindgren’s face, and the way he had immediately asked for the panties, and she started to climb up. The waiter lifted her, and though she worried because of how clearly she could see his lust in his face that he might try to touch her between her legs, he remained professional, and she found herself on her hands and knees among the silverware and the stemware, rather disoriented by the entirely unfamiliar perspective on a dining room.

“Go ahead and bring our other dessert, too, please, waiter,” said Mr. Veau. “We’ll have the cunt and the crème caramel together.”